Here you will know a little about our beaches, the Iguassu Falls, the nature of the Pantanal Sul and the culture of Bahia.

Meet our beaches, the wonderful Iguassu Falls, the abundant nature of the South Pantanal and the culture of Bahia.

The Pantanalis the largest continental flood area in the world. Approximately 210,000 km2 are spread over three countries of South America: Paraguay, Bolivia and Brazil. Most of this plain (approximately 140,000km2) is in Brazilian territory in the states of Mato Grossos do Sul and Mato Grosso. Due to the geological profile provided by a water pulse, the Pantanal has two very distinct seasons, both dry and full. It is considered one of the richest places in biodiversity in the World. This ecosystem has the highest density of wildlife in the Americas, compared to the savannas of Africa.

Salvador de Bahia is the Afro-Brazilian heart of the country. Previously capital of the Portuguese colony of the New World, the city continues to be an open air museum where cultures from both continents mix in a never ending spectacle of color, dance and sound. Numerous churches and baroque buildings line the ancient and crowded streets. 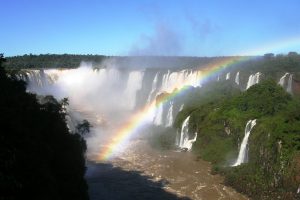